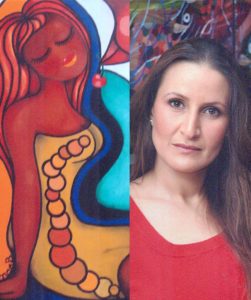 When Sanaa Bouyaghroumni was 6 years old, she moved with her parents to the Netherlands. She was raised in a very artistic family. Her mother is an accomplished artist, her sister a writer and another sister is a fashion designer. Art was just always there and it never let her go.

It was 2010 when Sanaa, who has always felt the urge to create, started painting. Partly inspired by her mother, she experimented with different painting techniques, but eventually she chose oil paint. Sanaa is an autodidact and developed, inspired by life and her Arabian background, an unique style full of vibrant colours, a trace of 1000 and 1 nights and hidden messages.

In September 2012 Sanaa won the second prize of the Public Choice Award at the Annual Dutch Art Fair. In 2013 she had a solo exposition in Rabat, Morocco and sold out, several in The Netherlands and also in Barcelona, Spain.

Sanaa paints literally with her bare fingers. By touching the canvas with her fingers her creative energy is intuitively released and materialized into paintings that challenge the viewer to look behind the shallowness of the first impression. Sanaa’s paintings are an endless quest for different moods, fixating light and movement by merging colour tones with material. Her work is part dreamlike fantasy, part reality; simultaneously abstracted figuration and figurative abstraction.

Elegant, alluring females grace in her paintings, always close-eyed, delicate, muted, subdued, mysterious. But than again that is just the first impression. Another focal point on Sanaa’s canvasses are wide opened eyes, bold, staring, glaring, confronting. There is a quietness implied, contrasting with Sanaa’s signature style of meandering curvaceous organic geometry, provoking intimate questions to be unravelled by the viewer.

Sanaa’s message to the world is one of peace, hope and tranquillity, but also a mirror of subtle illusions and ambiguity. A key is to be found in the poems of the famous 13th  century Persian poet Jalal ad-Din Rumi that are a reference for each of Sanaa’s paintings. It is up to the viewer to decide which door to open and what turn to take. Because sometimes, just sometimes, like the famous German author Ludwig Börne once stated: “losing an illusion can make a person wiser than finding the truth”.